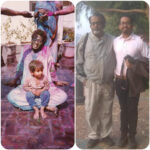 This is a record of a series of conversations between a Boomer father and his Millennial son over a period of thirty years. While it does not claim to answer any question of earth-shattering consequence, hopefully, it will strike a chord in some other parent or child.

My first brush with cormorants was in a Bengali rhyme ‘পানকৌড়ি পানকৌড়ি ডাঙায় উঠনা’ – ‘Cormorant(Pankouri), O Cormorant stay in the water’ . Interestingly the Bengali moniker connotes a glutton or a diver. There can not be an apter description of this bird’s behaviour – it is a voracious eater and moves around in deep waters like an otter. In Bengal fish farmers lay criss-cross ropes laden with coloured swags above their ponds to keep away the cormorants.

A Satyajit Ray story was my second encounter , wherein Ray talked about how cormorants would use their lungs as ballast tanks as in a submarine to float up or dive into the water. Much later in life did I learn about a US defence department research project in which a submergible aircraft (https://en.wikipedia.org/wiki/Lockheed_Martin_Cormorant) called Cormorant was to be developed. While inside a submarine tube the aircraft’s wings would be folded around itself and while floating up to the surface , wings would unfold in preparation for launch – very similar to the Cormorant Bird’s under-water and in the air movements. Is that Science imitating life !!

My third meeting with cormorants in the world of words was in the least likeliest of places – in a Bond Novel where one would not expect to accost birds with feathers. In “You Only Live Twice” Bond takes refuge in a Japanese fishing community. Fisherwomen out there would not use nets or lines – instead they would use their cormorants for fishing. A snare would be put around the cormorant’s neck to prevent it from swallowing bigger fish. The bird with a fish in its gullet would be brought back to the boat and made to spit the fish out into bin of ‘fresh catch of the day’!!

Having grown up in antediluvian pre-internet times , I did not get to see a cormorant in a picture or in flesh and feathers till I hit my early 20’s . From my reads, a certain mystical imagery had developed in my mind about cormorants. Thus the first sighting at Joka marshes (my institute campus in Kolkata) was laced with a sense of underwhelm. Here was a bird with an ungainly body, dull feathers and an awkward low flight. But then it started growing on me – I started noting and marvelling at its aircraft-like take off with run-up ; its landing using its webbed feet as landing gear; the periscope like look of the head with body inside water; the sudden disappearing dive and the equally sudden erupting reappearance 100 feet away. The voyeuristic affair continues – hopefully till …

I am a newbie birdwatcher and get fascinated by the things that seasoned birders would brush off with a knowing smile. Paths of cormorants and mine have crossed a few times but no other meeting has been as unexpected as the one in the heart of a desert at Dubai. It was an artificial lake made with desalinated sea-water. The lake was in a large residential complex. This was not an aviary but a whole eco-system created with desalinated water !! I have recorded bulbuls, cormorants, lapwings, hoopoes in Dubai – most are introduced or vagrant species not native to Dubai.

Collective noun for a group of cormorants is an unusual but fitting word – sunning. Sunning is what a sunning of cormorants needs to keep doing when out of water. A cormorant with its wings spread out in a sunning position is the most photographed pose of the bird

Protagonist of our story, My Cormorant Tree is housed in Rabindra Sarobar , an artificial lake created by the British – a creation as grand as the Victoria Memorial or the Howrah Bridge. I guess it is home to some 500+ cormorants and they regularly compel me to interrupt my walk and watch their antics. That my cormorant tree is thriving in a lake surrounded by a concrete jungle is a most gratifying bliss.